Lessons from the river

Lessons from the river

When the last tree has been cut down, the last river has been poisoned and the last fish has died, we will discover that you can't eat money

- this Indian proverb, quoted in the context of recent events, perfectly captures the reality we face...

The events of recent weeks related to the Oder River environmental disaster have prompted deeper reflection not only on the state of the water environment, but also on the state of monitoring of surface water bodies (SWBs), which are the basic unit of water management. This concept was introduced as part of the implementation of the Water Framework Directive (Directive 2000/60/EC of the European Parliament and of the Council of October 23, 2000 establishing a framework for Community action in the field of water policy).

According to current regulations, SWBs are divided into natural and heavily modified or artificial. For natural water bodies, their ecological status is determined, and for heavily altered (e.g., regulated or converted to a dam reservoir) and artificial water bodies, their ecological potential is determined. The second element that determines the overall condition of waters is classifying them as good or below good. If the chemical state of the waters does not achieve good status, the overall state of the waters is assessed as bad, regardless of its ecological status. These assumptions in practice mean that it is the chemical state that determines the classification of the overall condition of waters in Poland. 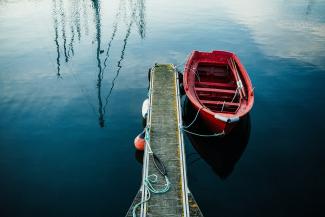 An example is the year 2018, when the long-term drought affected the implementation of surface water monitoring tasks. Some of the surveyed SWBs experienced only intermittent flow, which made it impossible to obtain the full required sampling series of 12 or even 4 times a year. A situation where there is insufficient measurement data, in practical terms, means that the status of surface water is not known.

When analyzing the results published by GIOŚ for river waters, it should be noted that the SWBs surveyed in 2018 account for only 30% of all water bodies designated in the Łódź Voivodeship. Moreover, only 1% of them have good ecological status.

The situation is no better for artificial and heavily modified river waters; here, in 2018, the status was not studied for more than 75% of the SWBs, and only 3.7% of them obtained maximum or good status.

Chemicals enter waters from point, area and linear sources, that is, mainly: sewage treatment plants, surface runoff from agricultural fields as well as roads and transportation routes. The consequence of chemical runoff into waters is eutrophication. This is the process of enrichment of water bodies with nutrients, causing an increase in the production of algal biomass. The phenomenon of "water bloom" is further exacerbated by climate change - high temperatures, low rainfall and consequently low water levels caused by hydrological drought.

The chemical status of the Łódź Voivodeship waters surveyed in 2018 shows that out of 87 points surveyed, only 2.5% or 7 SWBs achieved good chemical status. The substance most frequently recorded as exceeding standards was benzo(a)pyrene-a carcinogenic substance belonging to the group of polycyclic aromatic hydrocarbons (PAHs), which is one of the main components of smog. Released into the air, benzopyrene has the ability to penetrate soil, water and accumulate in living organisms or bottom sediments, which is why it is so important to monitor and continuously control its concentrations, not only in the air.

According to the analysis, none of the studied surface water bodies, both natural and artificial or heavily modified, reached good overall status. In 2018, all SWBs were assigned a poor ecological status!

The condition of the waters of the Łódź Voivodeship waters is not an exception – it is similar in surface waters in other regions of the country. Only 10% of Poland's rivers have an ecological status/potential of good or very good, 60% moderate, and 30% poor or bad.

Accordingly, there are two important conclusions: the first one concerns the increase in public awareness of the condition of surface waters quality in our country, and the second one is access to

current information. In this article, I analyzed 2018, due to the fact that the Chief Inspectorate of Environmental Protection does not publish more recent research results. In addition, many times the assessments of parameters, e.g. physicochemical parameters (i.e., oxygen conditions, biogenic conditions, among others) are the average of only 4 measurements taken annually. Such circumstances, although consistent with the regulations, do not give a full picture of the dynamically changing conditions in river or lake waters.

In Poland, the lack of continuous monitoring of surface waters carried out by GIOŚ or its subordinate units, as is the case with atmospheric air, results in the inability to make effective and quick decisions to improve the condition of the water ecosystem.

On-line research of surface waters is carried out by various research centers in Poland. At Lodz University of Technology, in 2015-2017, the MONSUL project (Analysis of factors influencing the ecological state of the Sulejow Reservoir based on continuous monitoring and an integrated 3D model of the reservoir) was implemented, one of the main objectives of which was to launch a measurement system to assess water quality parameters in the reservoir. The monitoring covered, among others: water temperature, pH, oxygen concentration, salinity, chlorophyll concentration, and ammonium content. On-line data was collected by 2 measurement probes located in the reservoir and then published on an ongoing basis on the project website (Monsul (lodz.pl). Continuous monitoring, despite the fact that it is expensive and requires technical service, has disproportionately more benefits and could contribute to increasing the control of the water status, which in turn could prevent the disaster we are dealing with on the Oder River. The golden algae, which, according to the service report , were supposed to kill many hundreds of tons of fish in the Oder River, are not a species specific to freshwater.

They develop in salty waters that are present in the river due to discharges of post-mine waters and sewage containing excessive amounts of chemical compounds. Due to anthropogenic activities, the pressure exerted on surface waters triggers a series of chain reactions, the effect of which is the deterioration of the condition of the entire ecosystem, which will take many years to return to its original state. The current situation may be improved not only by the increased control of sewage discharges along the entire section of the river, continuous monitoring of the water status, but also restoration activities, i.e. those that will restore natural conditions wherever possible, while maintaining the conditions necessary for the current use of water.

I think there are many rivers to cross before we understand that water is the most precious resource on Earth.