How to reduce traffic jams?

How to reduce traffic jams?

One of the biggest challenges of today's city is too much traffic. Expectations of smooth traffic flow require comprehensive solutions and a systematic approach. 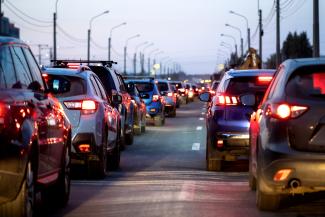 This problem has also become a subject of rankings and so, according to the TomTom Traffic Index 2021, Łódź is still the most congested city in Poland. The reason is simple -too many cars with limited road network capacity. This can be seen both on the outskirts of Lodz, in the zones of entry roads from neighbouring cities, and in the very centre. The agglomeration traffic is additionally compounded by transit traffic resulting from the as yet uncompleted ring road and the inadequate network of access roads to it.

The change in the demographic structure involving mass relocations from the city centre to the outskirts and beyond Łódź, combined with the location of work, study and leisure facilities, means that the problem of congestion on access and exit roads will grow. The only possibility of solving the problem is to systematically increase the capacity of access roads and increase the possibilities of access by other means of transport - the resurgent agglomeration railway and the reconstructed tramway lines.

Due to the tight built-up area and the relatively modest road network, it seems unlikely that the capacity of roads and intersections can be significantly increased. Therefore, the number of vehicles in the centre should be limited. The only way seems to be to reorganise traffic. The number of car parks should be increased and they should be located where there are important junctions and where there will be a large number of vehicles commuting from surrounding towns or districts. A parking ticket from such a place must also be a ticket for all means of public transport - Park & Ride systems. Only then will drivers be willing to take advantage of this possibility.

Limiting the number of vehicles traveling on the road requires both efficient and relatively cheap public transport. Reducing the frequency of services and raising ticket prices will only increase the problem.

Uncoordinated and prolonged renovations of nearby streets and intersections additionally overload the local road network. Another problem is the need to accommodate delivery traffic. In modern solutions, such traffic is allowed during hours when the number of vehicles is significantly smaller. There is a similar problem with maintenance work and keeping green spaces and roads tidy. These do not need to be carried out during peak traffic hours.

Only then will the use of traffic calmed zones and pedestrian zones serve their purpose and provide greater living comfort for residents and visitors alike.

Employee of the Department of Vehicles and Fundamentals of Machine Design Conducts classes related to transport, programming languages and internal